September was a very busy month for the Friends of Maryhill Park! Click the links to jump to the bits you are interested in, or read it all 🙂

END_OF_DOCUMENT_TOKEN_TO_BE_REPLACED

Inadequate drainage is a big problem in the Park, making the ground very waterlogged in places and also allowing water to run over the paths which then freezes in winter, hazardous for walkers. The Volunteers have decided to make fixing the Park drainage a priority.

So far, we have used a metal detector to find and mark the drains that exist in the Park, and have also mapped them:

Then, starting at the Maryhill Road entrance, we have been working our way up the Lime Avenue, digging out the drains and clearing or digging new gullys along the sides of the path. Some drains are in very good condition: 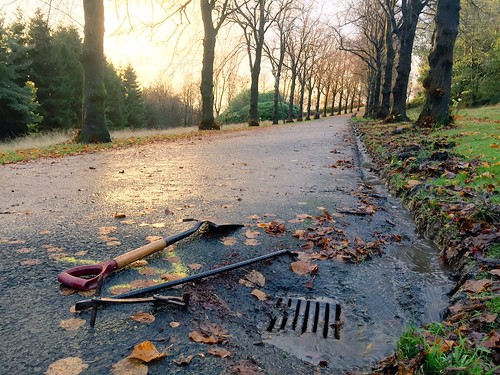 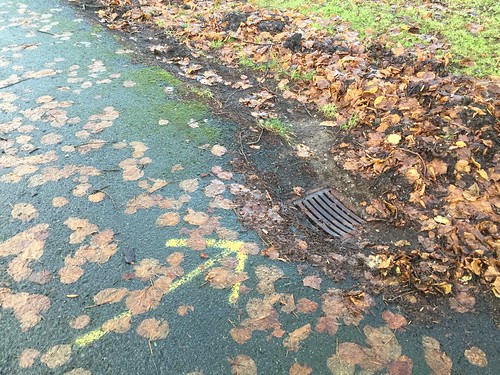 Others have been replaced with steel plates which have rusted in place, so we have drilled holes in the plates to allow drainage: 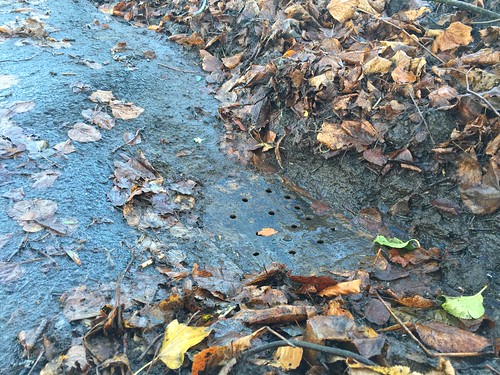 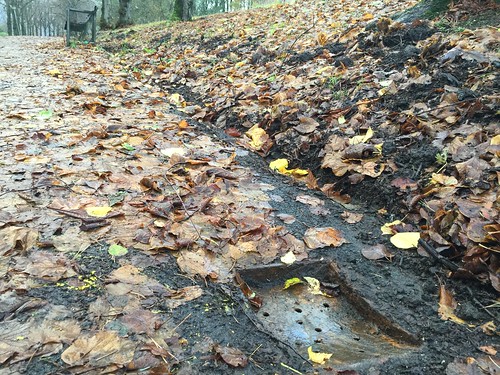 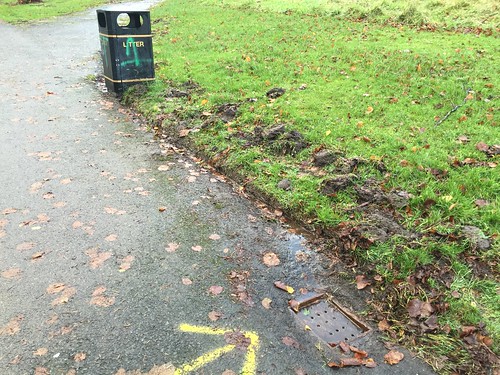 These should still drain well, providing they’re regularly kept clear of detritus. Other drains have been blocked with pieces of wood or concrete, we plan to swap decent gratings from little-used drains to these places where they would be more useful. Another problem is that in some places new benches have been installed with no thought to drainage – in fact in one place the tarmac appears to be over a drain. We are digging channels behind these benches to allow water to flow past. 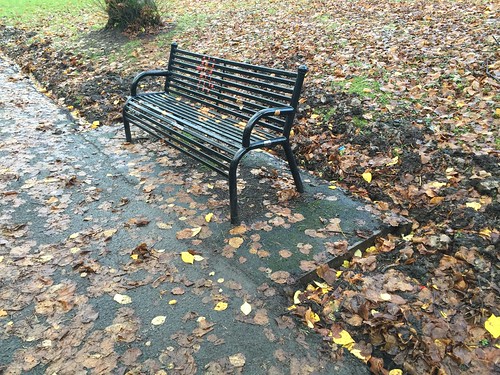 We have mostly finished the Lime Avenue drainage, we plan to continue around the Park. We have also been investigating near the playpark, where the water regularly floods over the path. the metal detector found a drain off to the side of the path which we have dug out – it backs up and overflows in very wet weather, but drains normally most of the time, so we plan to improve the gully to this drain to prevent the path flooding in normal circumstances. In very heavy rain the path may still flood, but we have also dug a channel on the other side of the path to allow floodwater to drain off the path. 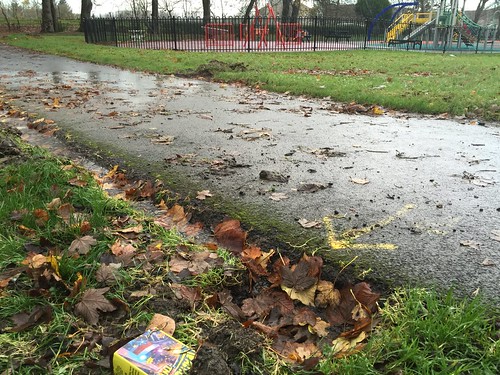 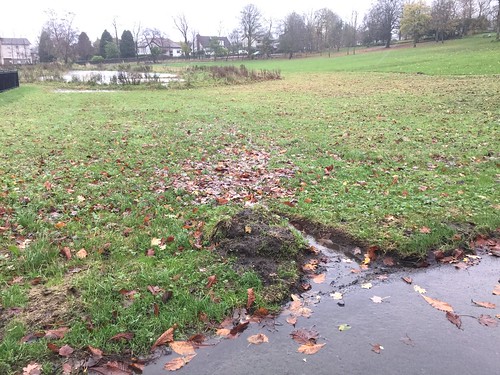 Today’s volunteering was a bit different – instead of working in the park, we had a walk-around to look over work we’ve already done and discuss what to do next. It was very good to see some more people coming along to give their input.

Firstly it was emphasised that the majority of the work of the volunteers met with the full approval of the Friends committee, and our hard work is appreciated. Some work, such as the ‘laying’ of the overgrown beech hedge at the bowling green, was commented upon as being especially good, specialist work that the Council / Glasgow Life would never have carried out.

We need to continue to have open dialogue about the work of the volunteers, and suggestions about how to do this would be welcome. At the moment we send out these emails, put updates on the website, Facebook and park noticeboard, consult on new ideas and report on work completed at every meeting, and of course anyone is welcome to come along on Sundays to discuss what we are doing, but we recognise that not everyone has access to the Internet or is able to come to the Sunday volunteering.

– Some dead-looking trees near the play park were inspected, but Judith assures us that they are Ash trees and they’re meant to look dead at this time of year.

– The shrub bed at the bottom of the centre path next to the play park will be trimmed in a similar manner to the bed a bit further up the path. At the suggestion of Judith, we will save some Horse Chestnut seedlings to replant elsewhere later.

– The bed around the Whitton St gate was discussed – suggested that we ask LES to prune the boundary hedge with the others. The laurels will be left for a year or two before pruning. In later discussion (not all present) it was suggested that we re-concrete the circular base and ask LES for a planter to sit on it.

– We discussed the wish to plant some more decorative plants under the trees, and towards the fronts of the woodland areas. It was suggested that these would have to be shade tolerant, could be smaller trees such as rowan, elder, flowering shrubs or shrubs with colourful stems, also they could be scented.

– The hollies need some more tidying work. Sarah is going to ask LES if they can use a stump grinder, but there’s a low probability of this happening so we will cut the stumps as low to the ground as possible, and try different techniques to deal with them. The litter and rubble under the trees needs clearing and raking out. There was discussion about removing the rogue (Ash?) tree in one of the hollies.

– We discussed considering measures we could take to encourage wildlife. ( A frog and a number of nearly black bumble bees were seen during the walk.) It was commented upon that nettles are good for wildlife, so only those at the front of the beds at the Bowling Green will be tackled. There are other plants and methods we could use to encourage wildlife, such as buddlea for butterflies, various flowers for bees.

– It was emphasised that we have an obligation to ensure we don’t disturb nesting birds when we’re working, though no sign of bird nesting was observed in the hollies.

– In the bowling green, we can do some tidying up for the summer fair – hack back the nettles temporarily.

– The idea of a path from the bowling green up to the trig point was discussed, as a possible volunteers project. Also discussed was the idea of asking Glasgow Life about the fencing at the bowling greens, with the aim of making it look neat and not derelict, perhaps by moving some fence panels.

– The beech hedge overlooking the Campsies was discussed, agreed that we would let the cut stumps sprout for a couple of years then the shoots could be woven to produce a hedge effect similar to on the opposite side. Neil suggested a bench with a gap facing the Campsies would take advantage of the view.

– The large rhododendron was discussed – opinion was that it should be left in the shape it is. Suggestions were that the centre open space could be made into a hidden garden (Ben) or that the centre trees should be removed to improve the shape (Judith).

Next week we will be back to normal, working on the shrub bed near the play park.

We have literally thousands of bulbs to plant, so this Sunday we will be doing  bulb planting. We will be meeting at the Whitton Street entrance, and will be working from 2-4pm. Please feel free to turn up at any time – you are not expected to do the full 2 hours!

If we have moved on from the Whitton Street gate area, there will be information posted there about where you can find us. Please come along, whether you just want to watch, or plant one bulb, or one hundred!

Everyone is very welcome, of all ages, just bring yourself/your family/your friends and something to dig with if you are able.

We look forward to seeing you, and if you can’t make it, look out for the flowers coming up in the spring 🙂

(To those of you who usually come along and volunteer on a Sunday, we will be doing the bulb planting instead of the regular pruning this Sunday.)

Another very successful weekend of work – thanks to all that attended!

The beech hedge along the north side of the greens has now been tamed for about half of its length, we hope to finish the job next weekend. The steps to the bowling green from the Maryhill Road entrance have also been cleared, they look rather grand now 🙂